Significant Changes on the Cubify Site!

To be honest, I was beginning to be more than a little concerned that the Cubify web site was actually going to be a weight around Cube sales' neck.  I have been involved with a lot of Beta programs and normally sites in beta have some significant direct interaction with users.  In this respect, the Cubify beta site seemed isolated to the point of inactivity.

Fortunately, appearances were deceiving.  That became a wonderful revelation with the sudden appearance of a whole new look and a whole new store infrastructure that solves some of my most severe criticisms of the old beta site.

So let's take a look!


The first thing that struck me is that the photography and layout are stunning.  But, the beauty also extends to revealing some of the capabilities of the Cube.  There are some items I'd not seen before.  And, take at look at that yellow shoe!!!  It's smooth as glass with none of the distortion that I saw on my visit to 3D Systems headquarters.  I'm particularly impressed by the blue object just next to the Cube.  It prompts all kinds of questions regarding support materials and support material strategies.

And don't miss that invitation to pre-order your own WiFi supported Cube.

I'm going to quibble a bit with the order of the major buttons.  Let's assume that I already own a Cube, which I do not.  In order of importance, to me as a Cube owner the buttons would be (1) 3D Printable Creations (2) Cube 3D Printer (including support and replacement materials) and (3) Co-create using Apps.

I'll discuss more about Cubify and how it fits with the Cube in a later post.  But, I can say this.  Without the Cube I'm not all that interested in Cubify.

Even so, this is a big improvement over our introduction to the Cubify site when it first went up.

In this post, we will only address two of the Home Page menu items. That is because the others deserve posts dedicated to themselves.

Frankly, I've been giving them a fit about the first site's organization when it came to mixing rendered models with printable models.  Had it stayed the way it was it would have been very difficult for me to be excited about it.  I understood that their ultimate goal for Cubify was to be a source for all things 3D.  But, I worried that the rendered models were creating too much noise for those of us that wanted items that could be printed on our Cubes or ordered from the Cubify Cloud.

THANKFULLY, they have VASTLY improved the situation with a whole new organization and infrastructure. 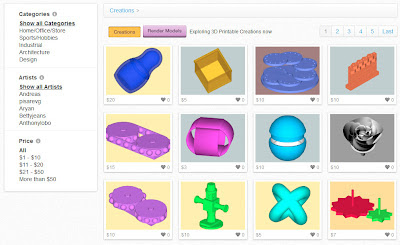 The biggest improvement is in using buttons to create a clear distinction between Printable Creations and Render Models.  And, by having printable creations as the default.  The next big improvement is the Categories List.  I am going to go out on a limb and assume that this list will grow as the need arises in a hierarchical fashion.

One of the problems that all 3D model download sites have is that is it very difficult to find exactly what you want without wading through page after page of images.  Right now that isn't a problem on the Cubify site.  But, the site designers need to be aware that finding ways to narrow down a search is a good thing.  This is certainly a start.

Interestingly, many of the Render Model samples appear to be potentially printable.  Once again, I will assume that this is an artifact of the beta process.

Clicking on one of the printable creations opens a great dialogue that offers us several choices, from printing our own, through various plastic alternatives and at least in some cases, being able to purchase full color models from the Cubify Cloud.  A button, or lack thereof, let's us know what options are available for any given object.

All in all this is a very welcome improvement that finally gives me the confidence that the Cubify site will be able to go toe to toe with the other 3D sites.


Clicking on the Creative Partners menu choice brings us to some wonderful news.  I can't think of two better partners to enhance our user experience than Freedom of Creation and My Robot Nation.

Freedom of Creation is behind most of the most innovative samples we've seen on the Cubify Site.  They vastly expand the range of possible choices when ordering from the Cubify Cloud.  We'll talk more about this in a later post.


My Robot Nation, in two words, is "Simply Marvelous"!  I am so impressed by what they do and how they do it that I have purchased somewhere around 20 robots for various children and adults.  Yes, adults!    It is not only the beautifully easy design process that they've created to design the robots.  It is also the fact that they know, better than almost everyone else, how to communicate to their users.  Creating a robot on My Robot Nation is a class act from start to finish.  And, I am VERY happy to see them be a part of the Cubify experience.


If 3D Systems keeps signing up partners of the calibre of these two wonderful companies, the Cubify experience can only get better and better.

In a subsequent posts we will explore the rest of the Cubify Home Page menu selections.