Cube Features I Have Most Appreciated

I probably should have gotten around to this post a lot earlier, when parents might have been considering a 3D printer for their child or themselves.  (It's OK to be self-serving on this one!)

Those who have a Cube and another 3D printer can relate to why I REALLY appreciate the fact that the Cube has a heated printing surface.  With my Cube in the hands of the staff of Freestate Challenge Academy last week, I tried printing some hangers the students had specified on a printer not having a heated bed.  My basement is colder in winter and while I had not problems printing PLA with my second 3D printer during the summer months, I had to abandon the task due to warping.  Even in summer I was unable to print in ABS on my second printer due to warping.

Warping is very rare with the Cube since the bed is always heated to the optimal temperature to reduce it.

I love the size of the Cube.  It travels well.

In fact, it is the perfect size to carry around in a fabric rolling cooler that I'd purchased at Costco or Sam's Club.   It looks something like this one... without the beer and soda, of course!  LOL! 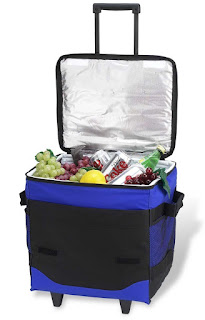 The Cube and 2 cartridges fit perfectly.  The padded sides of the cooler are more than enough protection.  The rolling function is convenient; but, the Cube is light enough that even with the added weight of the cooler, it's easy topick up and carry.

Unlike some personal 3D printers, the Cube is ruggedly built to withstand the rigors of travel.  I can confidently loan it out to people that have no experience at all with operating a 3D printer.   It can be carried from home to school or to friends homes with little likelihood of a breakdown.  In fact, in just this past 6 months, my Cube has traveled to in 3 states to1 museum, 2 conferences, a fundraising event, a school setting and at several homes... outside of my control and without a single failure.  THAT is an impressive record for a 3D printer.

Most personal 3D printings use either PLA or ABS as their source material.  PLA is easier to use.  But, it doesn't quite have the strength of ABS.  The fact that the Cube prints in ABS is a HUGE advantage and a very big deal to me.  In fact, I have used the Cube to print parts for my other 3D printer since my other printer does not have a heated bed and ABS warps without that feature.

The only difficulties I have had with the Cube are an occasional clog when changing cartridges due to my own impatience. And, that was only in the early stages of my learning to use it.  They have changed the messages on the LCD screen related to removing old filament and installing a new cartridge and those additional directions have helped to reduce the potential for clogging.  The only time I had a print job fail in the middle of a run was when I let the outside studio temperature get too high on a hot summer day.  Other than that, this printer has been a flawless performer.

From time to time, I get emails from new users telling me about some issues they have with a newly arrived Cube.  But, invariably, the Cubify team has been able to sort out the issues early.  There have been one or two users that have unreasonable expectations for a 3D printer.  But, for the most part, I get very positive feedback from users about their Cubes.  So, I am confident that I can tout the Cube's reliability not only from my own point of view; but, that of others who have contacted me.

While these are the 5 major things that I most like about the Cube, I can assure you that there are other things that make this little 3D printer a real winner.