At Long Last! 3D Printing for the Rest of Us!

How long I have waited!  And, it's finally here.  The first true consumer personal 3D printer.  The Cube from 3D Systems. 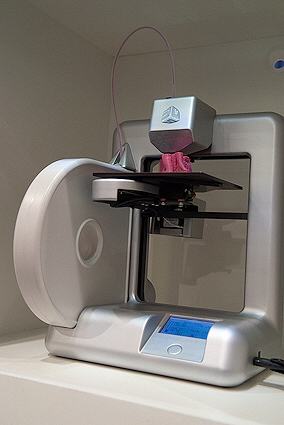 Right now, all we have to go on is a few images and some press copy.  But, as sparse as it is, it is enough for me to jump on the Cubify and Cube bandwagon with full enthusiasm.

Why?  Because I have seen this day coming for years and what I see is the first 3D printer offering that meets my definition of a true consumer product.

Now, what I'm going to say may sound like I'm trying to puff myself up.  But, that's not my aim at all.  I just want you to know that there is experience behind my enthusiasm for this new product.. even if I know almost absolutely nothing about it.

The experience I want to convey is my history at spotting trends very, very early and being a repeated early adopter in once obscure technologies that are now commonplace.

In 1968 few people even knew small format video even existed.  But, I was rightly convinced that Sony, Concord and JVC were onto something.  True the fuzzy black and white images were atrocious.  But, I was convinced that not only would it get better; but, a LOT better.  It did.

Then, sometime around 1974, I purchased my first portable color camera.  It was the Akai VTS-150 two-tube vidicon color camera.  Again, by today's standards it was awful.  Getting a color image required so much light that one had to worry about peeling the paint off walls with the heat from the lights!  But, that little camera was borrowed by ABC News to see if video could be used to replace the film they were then using.  Now, NOBODY uses film.

In 1978 it struck me that computer graphics could be used in my videos.  Starting with a little Bally Arcade game system that included Tiny Basic, I began to experiment with creating computer graphics with a whopping 160x102 resolution.  And, graduated to a ZGRASS UV-1 with a luxurious 320x204 resolution with four colors from a pallet of 256 colors.

This led to my being hired, in 1981 by Astrocade, the company that came to market the Bally Professional Arcade.  Sure, those games were crude by today's standard.  But, we would not have the high resolution games we have now had it not been for those early, and admittedly crude, introductory innovations.

By 1984 it became clear that my intuition of 1978 was rapidly being validated and I, along with Steve Bress, designed what is most likely the first professional desktop video application for the PC, the JVC Video Titler running on the Mindset Computer.  That was followed by working on the design for Pinnacle Systems very first video product.  Now look where video has come!

Oh!  And, don't forget today's animation.  We could not have what we now have without the early adopters that used what was available to push the envelope.  This crude 1985 video may represent the first Lip-Sync animation ever created on a PC in REAL-TIME and mixed live video with computer generated overlays.  Be sure to turn your sound down a bit.  It starts with a jolt!

My first digital SLR camera, probably around around 1999, was a grainy 1.4mpx Olympus D-620L.  Now, just a bit over 10 years later, my SLR is a super-clean 21mpx Canon 5D MK II.  Each advance in capability was built on the previous advance.

Now, none of this is all that special.  Accept to point out that I do have a good track record in spotting seriously cool trends very early in the game.  And, in doing so, I do not expect perfection in the first offerings with which I work.

The secret to growth has been working with each of these early tools to wring everything I can out of them to be ready for what comes next.  And, what is coming next for me is an introduction to consumer 3D printing via the Cube 3D printer and Cubify.com.

Not only do I enjoy these ventures into the new.  But, I enjoy taking these adventures with other brave and creative people.  And, this is where you come in.  I'm hoping that we can explore and learn together so that all of us advance much more rapidly than we might otherwise.  Let's look forward to having a huge load of fun!
Posted by Tom Meeks at 7:52 PM