This was the case of the Sense 3D Scanner.


I had not idea they were even contemplating a low cost 3D scanner... especially one that retails at $399.00!  My first clue came from an email sent to me by a friend that pointed to an article on the web announcing it.  That article, in turn, pointed to the Cubify.com page for the Sense. 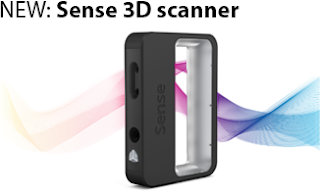 I was floored!!!  Talk about being out of the loop!  LOL!

But, I quickly made sure that I had one in house to test.  It arrived late last week and I quickly ran through a few tests.

Before I talk about my tests, I have to put into context my expectations.  First, I cannot afford a $30,000 3D scanner.  So, I have no idea how the Sense stacks up to the big kid toys.  The only "scanning" with which I have any experience is using 2D to 3D applications like 123D Capture.   I blogged about this technology in 2012.

My benchmark for a low-cost 3D scanner is that it has to be (1) easier than 2D to 3D techniques and (2) has to produce equal or better results.  If it meets those two goals it will be very useful to me.

Obviously, when one takes delivery of a 3D scanner, one has to find a suitable target to scan.  I found mine in a character from Monster's Inc.  I didn't go around the object a full 360 degrees because I simply wanted to see if it got ANYTHING.

I also didn't fully understand the options as I went through the workflow.  So, I inadvertently removed some detail.  I was amazed at how easy the process was and how well it came into Sculpt. 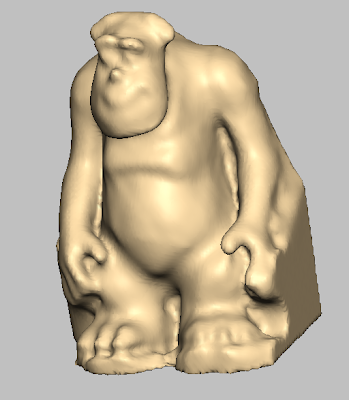 I wenr on to scan a styling manikin head that I'd previously used in 2D to 3D tests.  Here is the result as seen in Sculpt.  Because I wanted to print this without supports, I added a bottom and back to create a bookend affect.  The object then prints laying on it's back.  It's printing as I write this.  At the size that I am printing it will take 10 hours.  I'll take a photo when it's done and add it to the bottom of this post. 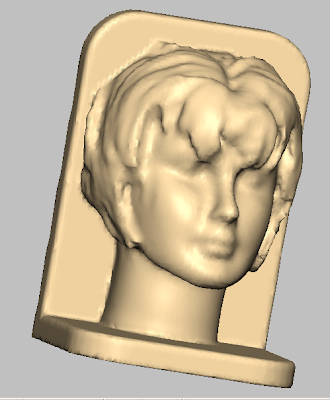 When compared to the process for 2D to 3D, this was infinitely easier.  And, in terms of being able to handle things like hair, it was amazingly more effective.  Here is a short video of a complete head scan.

Now, don't get me wrong.  Some things work and others do not... like very small white sculptures.  And, to be able to scan reliably every time, is going to take some practice.  But, the feedback that we get as we scan is very helpful and the software's capabilities to create a solid object from a partial scan are nothing short of miraculous.

Here is a short video that demonstrates the basic workflow from scanning to saving an STL file.


The software developers have done a wonderful job of making an intuitive interface that provides excellent feedback during the entire process.  The is made it easy to capture and edit something the first time it was used.  But, reliable results across a wide range of subjects is going to take a bit of experience.  In the little time that I've had it, I have been able to learn as much from the failures as I have from the successes.  All white objects, for instance, might require some special lighting to increase shadows, etc.

In all, I probably only have 2 hours of experimentation into using the Sense 3D scanner.  But, initial observations are mixed when it comes to using a tripod mounted scanner pointed at an object on a turntable.  But, that might be because I have a manual turntable and my hands are in the field of view.  I've also learned that it is best to put the object in an open area when scanning via a turntable.  Otherwise, close fixed objects seem to confuse the scanner.  Rest assured, I will put a LOT of time into coming up with the most effective strategies for using the SENSE.  It's a fantastic device at a fantastic price!
Posted by Tom Meeks at 12:45 PM