Paying Attention to the Fine Print

NOTE:  This article was written based on assumptions that turned out NOT to be true.  So, I decided to openly edit the article by crossing out the old information and using RED to make the new findings.

In spite of the initial challenges encountered by some early 3rd Gen Cube owners, including myself, I persist in my opinion that the Cube3 is an amazingly good 3D printer.  Supplied with the right materials, and properly set up, it produces extremely fine results.

I have the earliest version.  And, for this version to be properly set up so that auto gap works with the need to adjust it manually two things need to be properly calibrated.


While I probably do not have both print jets absolutely in line, they are close enough so that with a manual gap setting both print jets print without clogging.  But, with all the fiddling that I did to the individual print jet adjustment, I am pretty sure that neither of the print jets is protruding the proper distance out of the print head housing.  The reason for thinking this is that Auto Gap consistently sets the gap too small.  I always have to adjust the gap manually.

But, what is the proper protrusion?  That is a not yet solved mystery.  (Does NOT matter)

Sorry for the poor images in this article, all my good cameras were packed for Christmas travel.


Observing that the housing appears to be flat, it seemed reasonable that one needed a series of gauges from .1mm to 1mm so that even protrusion could be set and tested with Auto Gap until no manual adjustment was necessary.  Since the Cube3 prints 70 micron layers why not try to create the gauges using the Cube3, itself?  At least it would give me an opportunity to explore the new Cube3's characteristics.


Notice that each gauge is notched just a little deeper than the one before.  Each of the bars indicate the depth in .1mm.  In theory, we could select a gauge and used the 'ears' on each end as uniform anchors against the print jet housing and the print jets would be adjusted until they touched the notch.  The increments should be small enough to give fine control over the process.

Alas, it didn't turn out that way.

As we will see, the Cube3 DOES print an incredibly accurate object.  But, all extrusion printers that I have ever used, have one characteristic that is the fly in the ointment for my strategy.  For every line, there a direction reversal as it lays down the filament TWICE for each line.  At first, I assumed that this direction reversal creates a small, but show-stopping blob of filament that keeps the gauge from being precise.

So, I decided to see if I could specify a line thin enough so that the printer would not make a return trip.  I'm going to skip my first test that specified ten lines with widths starting at .1mm to 1mm.  From that group, I noticed that ALL the lines print at around .50mm to ,67mm.  And each of them had the turnaround artifact.  But, it appeared that the .2mm line had the smallest artifact.  So, honing in on that design width, I then designed an object with 3 lines having widths of .15mm, .20mm and .25mm.

Here is an image of the result at 70 micron layers.  Again, this is marked with the assumption that the blobs were caused by the abrupt change in direction.  That is NOT true.  The blobs mark the startting and stopping points.


Notice that there are artifacts on the top of each object.  That is because the object is notched to .8mm.  Each 'ear', for want of a better description has the artifact on the same edge.  And, the artifact seems to be larger, the thinner the top.  Using a microscope at 10x we see the top of one of the 'ears'.  Note that one side is very clean and the other has a sizable blob.  This is the .15mm line. The .25mm width line fared better.  While the blob is clearly evident, it is not only smaller; but, flatter.  So, for my gauges, I would try to create then with tops that .25mm thick.

So, the bad news is that could not find a line 1mm or under that did not produce the turnaround start/stop blob object.  But, the .25mm width's artifact might be flat enough to be accurate enough to be useful, with a little emery board application.

But, then I decided to see if I could minimize the blob by staggering the ends by the equivalent of 70 microns.  I was hoping to reduce the vertical buildup of filament by staggering the ends of the top surface.  But, what I saw was revealing.  The is a distinct round impression and a ridge around the impression.  If this was the turnaround point, the ridge would be gone.  So, in fact, it is the start and stop point and not the turnaround point.

Note, too, that the extra filament relative to the width of the thin line is considerable.  It hangs over the edge and in a .61 line, extends somewhere around .35mm.

None of this is earth-shattering.  But, it is interesting to know.  It now seems that I need to explore how the Start/Stop artifacts affect wider lines.  It could be that the affect on smoothness is less because the print jet passes over the raised area multiple times and smooth it down

OK.  So I haven't yet come up with an absolutely accurate way to test my print jet protrusion. 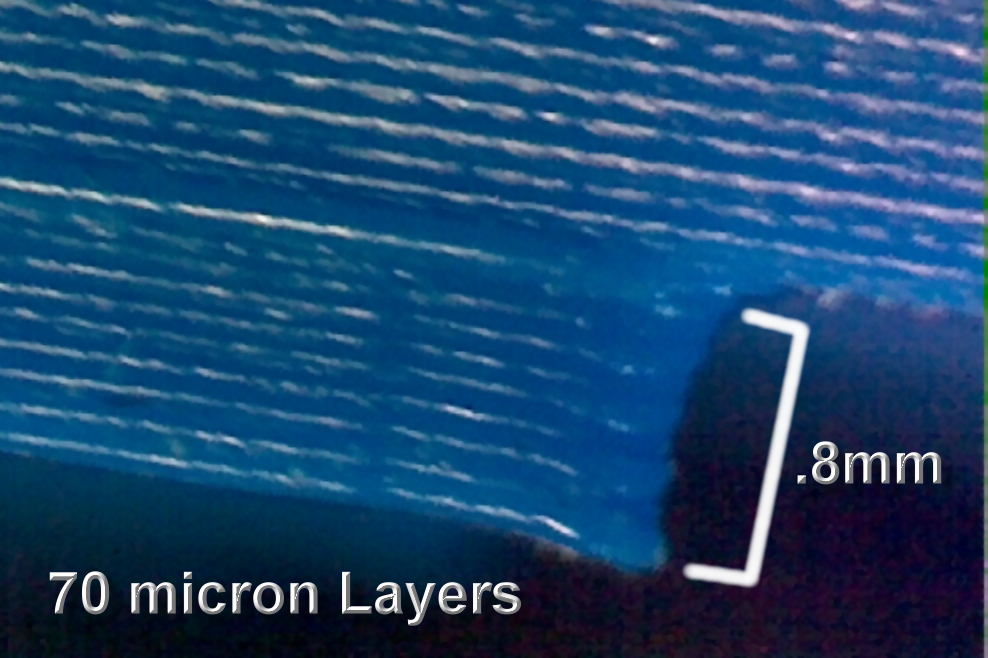 Moreover, while all of the specified widths under 1mm actually printed at around .6mm, that is still a very, very find line.  As far as I know, that was not achievable in any of the previous Cube versions.

Paying attention to the fine print worked both ways.  It pointed out a challenge if we are to create a gauge to check protrusion absolutely accurately.  But, it also pointed out just how finely and accurate the 3rd Gen Printer performs.  I love this thing!  :)

It turns out that the protrusion doesn't really matter, since we cannot change it.  We change the rotation of the Print Jet housing and the up/down location of the housing to accommodate protrusion differences.