The Airplane - Video 6 of The 3D Coat Experience series 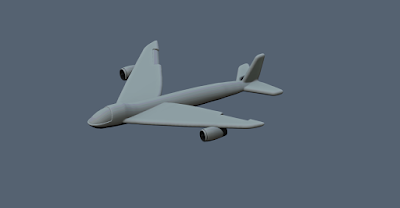 Hello again Cubify Fans
I just finished with tutorial number 6 and this one excites me a lot. In this video I will show you how to model a jet airplane using clip-art (see end of article ).

We are going to continue with the blob tool and using the load shape from the E-panel we load in clip art which is converted to the curves to create our parts. This method will help those who want to create but need some help in the starting out or in the drawing process.

I purposely start the modeling facing the wrong direction to show you at the end how to correct when you do this (and it will happen).

The shapes loaded in can be formed as parts with either rounded, sharp, or plane edges. This gives you power of the appearance of the part which will be helpful. For example if you want to make a marshmallow you would want the rounded edge on a circle shape. But the same circle with plane edges can become a tire. Use the sharp edge on the circle and you have a start for a pizza cutting wheel.


We introduce a new tool the cut and clone tool this tool has much value. Think of it as being much like the cut tool with the difference you keep the part you cut. Then you can move it or rotate and keep on same layer or apply it on a separate layer to manipulate later.

Have fun with this for those who want to jump right in I am uploading the exact shapes I used in the video just right click on them to save images. Remember to put them where you will find them.Thanks again for watching and look forward to your creations from this tutorial.

Posted by John Pennington at 12:12 PM