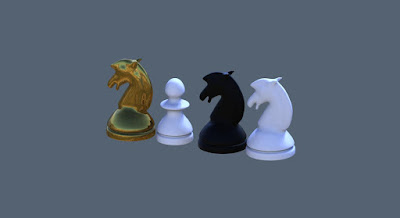 Continuing from the pawn we go into making the knight. the knight unlike the pawn needs at least 2 reference images we deal with that in this video. We also touch on saving models into the model library for later use. The pawn becomes our base model so that the rest of the set will have the same base contours. I took a little longer than planned in getting this video out due to a beta that kept crashing on me while recording. Now it is all set I went a little longer in this video than planned but it all works for the end result. let me know what you think.


I  am going to move onto the rook in the next video this mode will only need one reference image but will require some other skill that are needed to make the rook create symmetrically correct. see you then.
Posted by John Pennington at 2:02 PM