That is because ABS melts at a higher temperature than PLA and has a tendency to warp as it cools.  A heated bed helps prevent too rapid cooling.

Recently, I was contacted by a Cube owner, in the Netherlands, that was experiencing warping of a downloaded object they were using to test their Cube printer.  They were wondering if the problem was the build platform temperature or some other issue with their Cube.  In particular, they noticed that their Cube build platform seemed to settle in at 115C which is slightly above the nominal temperature in the specifications.

STEP 1: Try to duplicate the problem

Having experienced warp with a non-Cube 3D printer, and not with the Cube, the first thing I wanted to do was check to see how my own Cube printer did with the object they were trying to print.  They sent me to the link to the object, a slanted stacking bin, on Thingiverse.


Once I saw the design, which is generally very elegant, I felt that we would find that both of us would have issues with warping due to the way the plastic was so unevenly distributed on the upright areas of the part.  But, the only way to know was to print one in the same environment as the user which was a 68F room.

Sure enough, mine print warped in the same place described by the user.  So, the next step was to analyze the print process to see if we could determine why it warped.

I had to admit that I had no idea what the temperature of the build platform of my own Cube was.  So, when in doubt, I did as I always seem to do and spent money on the tools to check it out for myself... and other Cube owners.  I picked up a digital infrared thermometer with laser pointer from Harbor Freight.


I wanted to test not only the bed temperature, to see if mine matches that of the user; but, also to test the temperature of the piece as it was built.


Just as I'd hoped, our build platform temperatures were essentially the same.  This meant that there was nothing amiss with the user's Cube so they would not have to return it for a repair.  That was good news.


The highest ABS temperature that was recorded during the print was 123.4C.  This was actually at the top of the wall, late in the build.


But, between the bottom layers of the build and the top layers of upright wall, late in the print process,, things got interesting.  In the middle of the upright wall, the temperature was recorded as low as 77.4C.


That is a HUGE differential in temperature.  But, to make matters more interesting, scanning the upright wall returned a variety of uneven temperatures. 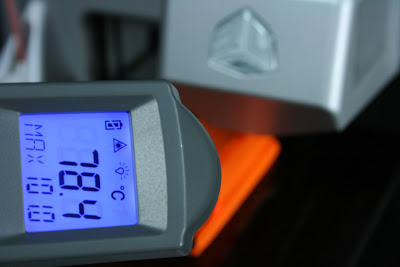 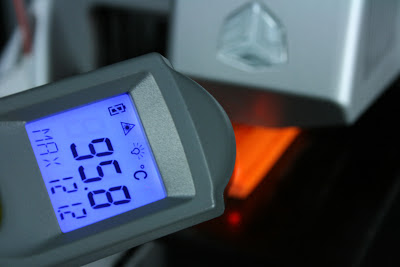 If might be hard for you to see.  But, the highest temperatures along the upright wall were where the wall was thickest..  This probably resulted in the thinner parts of the wall contracting more than the thicker part of the wall which pulled the corner of the wall inward and the bottom up.

So, as elegant and beautiful as the design is, it contributes to it's own warping.

The uneven depth of the wall is probably the principle reason why both of us experienced the same warping of the object as it printed.  In addition, the flat side resting on the build platform probably also contributes to the behavior due to its thickness and mass.

So, what we need to do now is to see if we can accomplish the same goals as this design that will work well with the Cube without warping.  So, look for an update in part 2.

While I have not mentioned the name of the user, since I have not had a chance to get permission to do so, I am very grateful that this was brought to my attention.  It is the perfect example of how Cube owners can help other Cube owners by spotting issues and exploring solutions!
Posted by Tom Meeks at 7:32 AM