Sometimes, like Hansel and Gretal's bread crumbs, little gems can be found in unexpected places.

Take a look at this quote from the Cubify Blog...

"On display were the new 2nd generation Cube printer, the CubeX printer – (capable of printing an item up to the size of a basketball, and in up to 3 colors at once) and an array of 3D new technology like Cubify Sculpt,  Cubify Draw and many more exciting things to see."


Now, I have not idea how to find the "many more exciting things to see"  But, I DID manage to do a Google search and locate something that gives us some insight into Cubify Sculpt and Cubify Draw.

Entering "Cubify Draw" as the Google search phrase, I came across an entry called "Investor Webcast".  And this brought up a PDF of a CES release from 3D Systems that mentions Cubify Draw and Cubify Sculpt.

I captured this page from the PDF.  Click on the image for the full size. 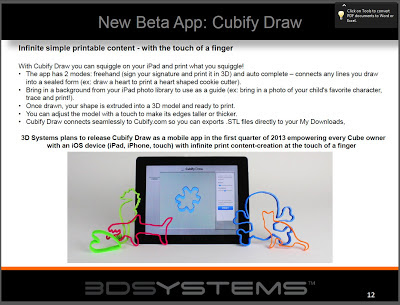 As a former teacher, I can tell you that this is going to make a LOT of parents and students VERY happy when they have a project requiring something in the shape of what they are studying,

Note that it is going to allow us to pull in an image on our iPads so that we can trace that image!  Even I am going to be able to do that.  Looks both useful and fun.  Can't wait for it to show up.   I purchased an iPad for myself and each of my grandchildren believing that some cool 3D apps where heading for that platform.  So, I'll be especially happy to see it released.

This one is a horse of a different color.  Again, click on the image to read it clearly, 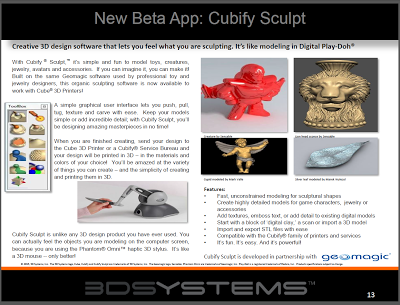 My intuition says that this is going to be expensive.  But, in reality I have no idea as to how much it's going to cost.  What leads me to believe that it might be more than a few bucks is the image of the haptics device in the picture.  Traditionally, they have NOT been at the low end of the cost scale.

Having said that, I have to admit that being able to create 3D objects by sculpting as if we were handling clay has been a sort of Holy Grail for me because it is the ONLY way my sculptor daughter is going to be able to generate her sculptures.  It's extremely difficult to create the kind of art she envisions with traditional 3D tools.

So, while I'm not sure what it's going to cost, I definitely want to follow its development.