Can the Scope be Helpful in Other Ways?

I know that some of you are saying, "Come on Tom.  Things can't be as rosy as you've shown so far!"

The Cube, like any other 3D printer is laying down a series of layers of melted plastic that must adhere to the previous previous layer of plastic that may or may not be positioned directly under it.  Moreover,  that cooling layer is sandwiched between a hotter layer above it and a cooler layer below it.  There can be hundreds of such layers.  I've not seen ANY 3D printer that lays down layers that are perfect at all wall thickness or angles 100% of the time.

ABS is tough, has a feel to it that is a LOT more pleasing than PLA and just plain looks nicer.  But, it has a tendency to warp.  I've already mentioned that I would prefer to use ABS plastic in my other 3D printer.  But, I can't.  Without a heated bed, it warps so badly that I just can't use it.

I love the fact that the Cube has a heated bed.  But, that does not mean that in some circumstances a little warping might not occur.  When that happens, we will see a line that is different in the sides of our printed objects.

One of the reasons I designed my torture test with differing wall thickness and shapes is to see how the Cube/ABS combination performs under completely different circumstances in the same print run.  And, to learn from what I find to design things that avoid potential issues.

And, the "What" that shows up in my torture test is that wall thickness makes a difference.  That's not surprising to me.  But, if you are a new 3D printer owner, it might be a BIG surprise to you.  Let's take the "surprise" out of it by seeing what it is up close.

I have to apologize for this picture.  All I have here right now is an old Sony Bloggie with absolutely no control over the exposure.  Here is the part that has a wall thickness of 1mm, the thickest of the objects in the torture test.  (I'll replace this picture later with a clearer one)


As you can see, there is a layer that is not absolutely perfect.  And, that imperfection extends around the part from the sphere to the extruded triangle.  That is what warping looks like.  None of the thinner pieces showed this characteristic.

There is something else that is not so easy to see in this particular photo.  But, CAN be seen under the microscope.  This is the wall of the box from the top.  Notice that it is not solid.


This is a behavior that I have seen over and over in my first 3D printer and in countless images in 3D discussion forums.  Certain thicknesses are more difficult for 3D printers than others.  The trick to avoid this is to know what thickness are optimal and which are not.  Obviously this has repercussions to the overall integrity of the object.

We know we can avoid this by designing our wall at .5mm or .75mm.  We can probably also avoid this by making our wall 1.25mm.  Remember, I said our findings aren't "Good" or "Bad".  They are "What" and the "What" in this case let's me know that I probably am better off avoiding 1mm walls in square boxes.

So, how might this have affected the overal piece?  The clue is to the bottom left and out of focus.  That is a single piece of filament that broke ranks and missed the corner.  And, it's right at the layer that shows evidence of warping.

Seen from the microscope's perspective, it's plain that this errant strand, probably allowed by the hollow wall, started the warping snowball.


This is the picture of the corner and layer where that filament took a shortcut.  As I said, wall thickness DOES seem to make a difference.

But, here is something else that is interesting.  NONE of the prints of the twisted star show any signs of weakness or warping.  The wall is just a little thicker than 1mm.  And, a close look reveals another interesting bit of information that we can use to our advantage.  Not only wall thickness; but, wall orientation seems to make a difference. 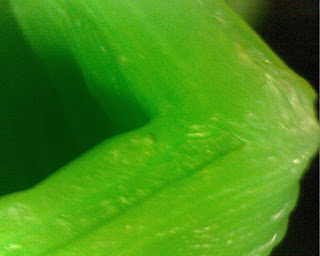 Here we see the same wall in two different orientations.  Notice that the bottom orientation shows a different inner characteristic than that of the top orientation.  One seems more solid than the other.  I find that fascinating.

What this seems to suggest that if we have a part that seems prone to warping, etc.  We might just want to try it at a different orientation on the print bed.  I don't know for sure that this will cure the problem.  But, it certainly suggests that rotating the part in the software that we use to convert STLs to Cube files might help.

In my case, it prompts me to go back into my 3D software and design an STL having several copies of this part with 1mm walls oriented in different ways to see if a different behaviour emerges.

I consider that it's my job to use up filament chasing down design problems so that you don't have to!  :)