A lot of thought was put into the design of the box in which the Cube arrives.  My advice is to NOT throw it away.  It makes for a great travel case for your Cube.  I know because my Cube went on a visit to see my granddaughters yesterday.

How many times do you hear somebody praise a BOX?  Not many.  But, the Cube box is designed to travel well and the Cube is one of those products that you'll want others to see and experience.

Putting the Cube back in the box to prepare for travel was a piece of cake!

If you have children or grandchildren in that 9-12 range you know how eager they are to be able to do things for themselves.  Taking the Cube out of the box and setting it up was no exception. With very few prompts from me, they had it up and running in no time.  They even figured out, on their own, that they had to remove the little screw in the cartridge that keeps the filament locked in place while traveling.

Having now had the experience of following the loading directions, I knew it would make it easier for them to cut off the filament about 6 inches above the printjet when packing it up.  That made it very easy for them to follow the Cube's on-screen directions.  Nothing baffled them in the process of setting it up.

They then chose to print the Macedonian shoe...

Now, the shoes are among the largest objects of the creations that come free with the Cube.  The time estimate showed 6 hours and 33 minutes to print and it actually took longer.  It's amazingly intricate and, even more amazing, was set up to print without raft or supports.

3D printing, by it's very nature DOES take time.  But, that doesn't mean you have to sit around waiting for it to finish.  You get it started and go off to do other things for that period of time.  In our case we decided to go to one of our favorite places, Longwood Gardens.

So, while Henry the Cube... yes the girls decided to name it... did its thing, we did ours.

However, there is one thing that needs to be mentioned that happened before leaving for Longwood.  My youngest watched the Cube build the shoe and, with a huge smile, said...


"I feel so proud... even though I didn't do anything"

THAT is a pretty significant statement about the emotional aspects inherent in 3D printing in the home.  Watching the Cube print is an inherently SATISFYING experience.  And, even though she only selected the item and pushed the LCD to get it started, she felt a deep sense of being part of the process.  I feel this every time I start a piece, whether it is one of mine or was designed by somebody else.  And she felt it too.

I had one Rook that I'd printed on the Cube and several others that I got from the 3D Systems people before the Cube shipped.  I thought it would be nice to take them on an outing while the Cube did its thing.  So, off we went!


Liking what they saw,  they sped off to play among the topiary. 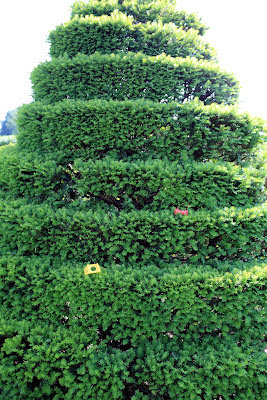 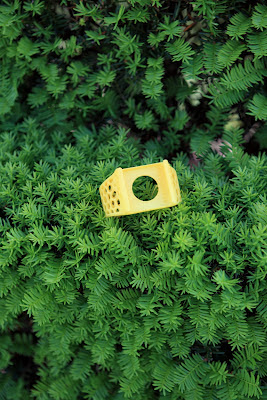 They even joined my granddaughter's for a game of hide and seek!


While most of the rooks played hide and seek, Blue bracelet contemplated how the Cube might be able to create a sundial of their own.  Red rook, having worn itself out, joined bracelet.

But, Yellow Nano, being made of VERY tough stuff, preferred to hang around with the tough guys at the topiary garden entrance.  None of that "sissy" stuff for her!  If only stone lions had Nanos!  What a pair! 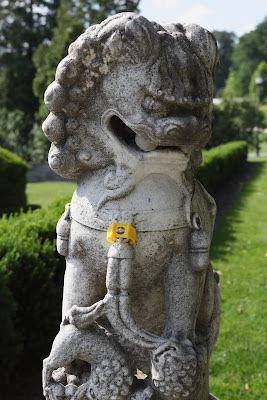 Moving inside the massive conservatory, after all that exercise, Red Rook demanded to be carried as they contemplated the beauty of these magnificent indoor gardens and fountains.

But, while they found the indoor fountains fascinating, all of the Cube prints agreed that the most spectacular of the many fountains to be found at Longwood were those that could be seen from the Conservatory's patio.

But, like any field trip with a bunch of eager kids, this one, too, almost had a tragedy.  While you can see it in the above picture, it's better shown below.  Why do Cube pieces ignore the warnings about not going too near the edge???  A gust of wind and off went Green Rook! 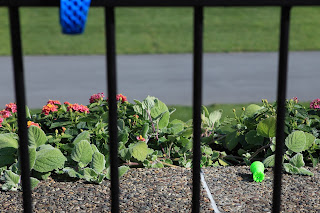 Fortunately, I had a monopod and was able to rescue him.  And, I THOUGHT he'd learned his lesson.  But, I was wrong.  There was a Wine & Jazz festival going on.  Some rooks just CANNOT hold their alcohol!

A little food in his stomach at the Italian Gardens helped and we had no more trouble with Green Rook the rest f the trip.  He does love cookies!


I had a wonderful time combining three things that I greatly enjoy... Longwood Gardens, photography and 3D prints.  There are many more photos on my Flickr site. You'll see dragons, tree houses, fields of light and the full beuty of the Italian garden.  To experience a slide show of the full Cube print field trip go to...

In the meantime, let's get back home to see how things progressed with the Cube!!!

By the time we arrived back to the house, 6 hours had passed.  The Cube was still printing.  But, the girls and I could see that it was doing a phenomenal job!  We were amazed and pleased by what we saw.

This was the first time I'd printed out a large object on the Cube.  They still need to work on getting the estimated build time just right.  But, that is a minor issue when one sees the quality of the print with such an intricate pattern without raft or support.

We ended up having to leave for home before the print was complete.  But, my daughter reports that it is finished and beautiful.  I'm going back to retrieve the Cube this evening.  Yes, I KNOW it's a 180 mile round trip.  But, if you think I'm going without my Cube for even a few days, you'd better think again!  LOL!